Sister Cities programs connect distant populations with one another through various exchanges, delegations, and partnership projects. Last week the Schaumburg-Schaumburg relationship between Illinois and Germany enjoyed ten days together after a German delegation of six visited their U.S. counterparts.

The trip coincides with the 35th anniversary of Schaumburg’s oldest Sister City relationship. The Illinois village became Sister Cities with the German county in order to connect U.S. residents with their ancestral history. Schaumburg County is located in Lower Saxony in northwestern Germany and was the homeland for many of the original settlers who established the village of Schaumburg in the states, hence the name.

The recent party of German visitors included four Schaumburg German-American Society members as well as a journalist and state legislator. Throughout their ten-day stay, the six enjoyed a full itinerary by day and recharged in the homes of host families each night.

The itinerary included a day trip to the city of Chicago, a meeting with the Schaumburg Engineering and Public Works Department, a visit to the Fire and Police Department headquarters, and a visit to the Renaissance Schaumburg Hotel & Convention Center to view the Friendship Stone—a gift given on the behalf of Schaumburg, Germany to commemorate the Illinois Village’s 50th anniversary in 2006. The visitors also had the chance to meet with prominent locals such as the village Mayor Al Larson, state representative Karsten Becker , the local deputy, as well as the Schaumburg Sister Cities Committee and its Schaumburg, Germany Subcommittee.

“The village is very grateful to all those who have supported, hosted, and offered complimentary or discounted meals for these exchanges,” said Kathleen Tempesta, Schaumburg’s Director of Community Services. “Because of this continued community support, these visitors will be able to experience the very best that the Village of Schaumburg has to offer.” 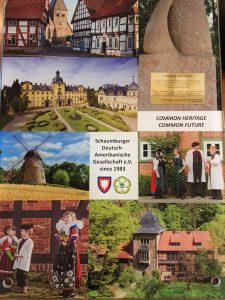 In the spirit of celebrating their 35th anniversary together, Mayor Larson of Schaumburg, Illinois received gifts on the behalf of the village from the visitors. These included a plaque adorned with photos of small town German culture and a key to the county of Schaumburg, Germany. In turn, Mayor Larson formally issued a proclamation which declared September 21st – October 13, 2018 as “Schaumburg Germany Days.”

As a continuation of the 35th anniversary celebration, the village received yet another set of guests from Schaumburg, Germany. This week on October 3rd, a student band of thirty members will be playing nine performances across the village. The German student band, accompanied by their teachers and parent chaperons, will be accommodated courtesy of AmericInn of Schaumburg through the 13th. Once again, the inspiring cooperation between community members and local businesses to support these visitors is made possible by Sister Cities program of Schaumburg.